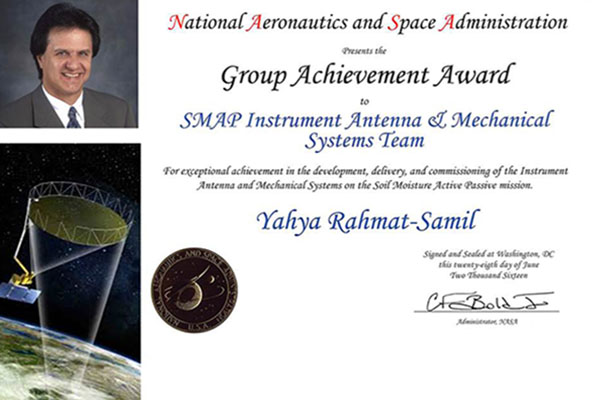 Distinguished Professor Yahya Rahmat-Samii receives the NASA Group Achievement Award, along with his colleagues at JPL, as a member of the SMAP Antenna and Mechanical System Team, “For exceptional achievement in the development, delivery, and commissioning of the Instrument Antenna and Mechanical Systems on the Soil Moisture Active Passive mission.” The award plaque was signed by the Honorable NASA Administrator, C. F. Bolden.

The photo shows an artist’s rendition of the NASA Soil Moisture Active and Passive (SMAP) satellite system that was successfully launched from the Vandenberg Air Force Base in January 2015 to study a critical element of the global water cycle, namely, soil moisture. An important aspect of the overall system was the RF design of the 6-m mesh offset-feed reflector antenna which was originally provided by Professor Rahmat-Samii and subsequently optimized by the JPL team. The antenna and boom assembly were built by Northrop-Grumman Astro Aerospace. The antenna and its feed assembly rotate at approximately 15 rpm creating a ground swath of about 1000 KM wide. The data being produced by this highly sophisticated instrument will assist various aspects of remote sensing of the earth from space at L-band radiometer and radar frequencies.