Listening to the Signals from Neurons and Jupiter

Rahmat-Samii’s long career is milestoned by his pioneering design in reflector antennas, cutting-edge research on the interaction between cell phone antennas and the human brain, as well as collaborations with NASA that recently saw an antenna that Rahmat-Samii worked on, reach Jupiter with the space probe Juno, on July 4th, 2016. 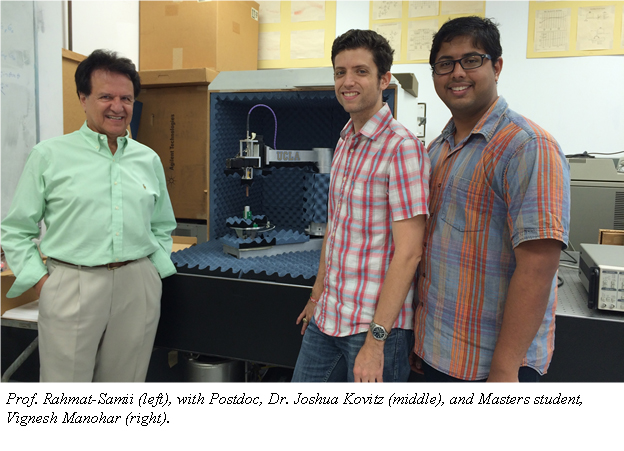 But that journey began in the University of Tehran, Iran, when Rahmat-Samii, still an undergraduate student, became fascinated with Maxwell’s equations. He continued his interests during his PhD work at the University of Illinois, Urbana-Champaign and then as a Senior Research Scientist at JPL. Rahmat-Samii has stayed fascinated with the infinite possibilities rooted in the mathematical foundation of Maxwell’s equations.

“In retrospect, you go back and see how you got excited,” Rahmat-Samii said. “The really profound, maybe signature, of my interest in this was that: even though it was those equations, but purely from those equations, Maxwell predicted the existence of electromagnetic waves.”

Rahmat-Samii said he is awestruck by the idea that it was only a bit over 150 years ago that Maxwell’s equations were discovered. The thought that prior to it, humans were completely unaware of the electromagnetic waves traveling around them with the speed of light (666,000,000 miles an hour), is tremendously exciting to him.

“And once you made that discovery and you connect them, now you start to use them,” Rahmat-Samii said. “So the role of antenna is essentially creating electromagnetic waves in some controlled fashion. If I want to put the signal in that direction, I design a special antenna that directs the signal in that direction. Even though our eyes cannot see electromagnetic waves, except the light, by understanding through Maxwell’s equation, we’re able to design all these things which work, which is amazing when you think about it.”

“Like Van Gogh who used his brushes to create paintings, Electromagnetic Scientists are artists who are able to paint the radiation of electromagnetic waves with their antennas,” Rahmat-Samii writes in a feature article entitled, “How should we excite non-engineers about our professions as antenna engineers and researchers?”. Read it at http://www.ieeeaps.org/news/recent-featured-articles.

Motivated by an almost child-like wonder, Rahmat-Samii led his group to investigate the interaction between electromagnetic waves and the human brain. The paper “EM interaction of handset antennas and a human in personal communications”, co-authored with Michael A. Jensen, and published as the cover story of The Proceedings of IEEE in 1995, was a very pioneering work in the field at that time.

Currently, Rahmat-Samii is developing a small antenna for medical applications. He said that doctors are interested in a probe that can collect neuron activities using a chip placed inside the brain, but the question is how to send the signal out to a monitor for the doctors to see. To create that communication wirelessly, his team is developing antennas that can fit into a one-millimeter cube.

“The critical components there, of course, are that you have to make it as small as possible,” Rahmat-Samii said. “At the same time, you want to make it as efficient as possible, to be able to receive and transmit the signals.”

Some professors from a university in Finland are collaborating on this ongoing project with Rahmat-Samii’s group. The group in Finland has already tested a representative antenna on animal brain samples. Rahmat-Samii said that in the future, the hope is to get the approval to implement the chip and antennas in a human brain.

One side of Rahmat-Samii’s various researches is to make antennas as small as possible. The other side is to use antennas to receive signals from the largest planet in the Solar System, Jupiter.

“I collaborated on the initial design of one of the antennas of Juno the spacecraft,” Rahmat-Samii said. “The antennas are designed to generate electromagnetic waves penetrating the atmosphere of Jupiter, to the inner core, and see what’s going on. So we’re very excited about that project. It just happened a few days ago on July 4th, 2016, after five years of voyage and I was at JPL where they had the celebration.”

The previous spacecraft to Jupiter, Galileo, also carried Rahmat-Samii’s handiwork. What is unique about Juno, according to Rahmat-Samii, is its use of solar power. There are three solar panels on the probe, facing towards the sun. But because of the huge distance between Jupiter and the sun, Juno can only get 400 watts, out of which 200 is used to keep all the electronics warm. So the usable energy for communicating to earth and other scientific activities is only 200 watts, which poses a great challenge for all the engineers involved in this project.

“We’re also involved in a very exciting project with NASA called CubeSats,” Rahmat-Samii said. “It’s a very small satellite that NASA is very interested in for both communication applications and science applications. We’re trying to design small antenna systems that can collapse inside a very small volume of about 2.5 u (10cm by 10cm by 25cm). That’s almost the size of a bottle of wine. Upon its deployment the umbrella-look antenna opens up to about 1.0 meter in diameter to create the required scientific instrument performance or communication link. This project necessitates a lot of detailed designs, modeling and testing.”

Having worked at UCLA for more than 25 years, Rahmat-Samii is very dedicated to teaching, because he views it as an opportunity to get his students as excited about Maxwell’s equations as he is. In 2011, Rahmat-Samii received the UCLA Academic Senate Distinguished Teaching Award, which he said is very dear to him.

For more in-depth information about his research, visit his laboratory website at www.antlab.ee.ucla.edu.