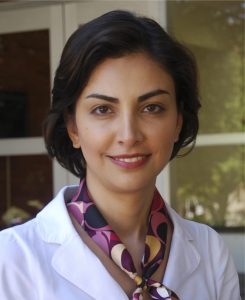 Electrical Engineering’s Professor Mona Jarrahi was recently recognized by Popular Mechanics for her pioneering research in terahertz technology. Her contribution to the scientific community was to improve the sensitivity of terahertz systems by several orders of magnitude. This new technology will allow for many commercial and research-based applications.

Professor Jarrahi’s specific contribution was to use plasmonic technology and laser light to generate and detect terahertz waves with significantly higher efficiencies.

Terahertz waves have very low energies compared to X-rays and  visible waves, Professor Jarrahi said, and it is, in fact, non-ionizing and non-destructive. This means that the technology can be used for various medical imaging and diagnosis applications.

Other applications of the technology include identifying biomarkers which are specific to certain diseases, detecting spectral signatures of gases in space, monitoring the concentration of greenhouse gases and health of the ozone layer.

Essentially, the technology has the potential to give scientists insight into environments as large as space and as small as molecules.

Additionally, one commercial application of Professor Jarrahi’s work includes providing corporations with the ability to check or analyze the physical integrity of products. For example, a pharmaceutical manufacturer could run checks on its products to weed out pills on the production line with gaps or cracks in them.

Admittedly, Professor Jarrahi said, terahertz technology has been around for a significant amount of time, but the sensitivity of terahertz systems was not very good.

Of the recognition, she said, “I’m very happy and honored.”