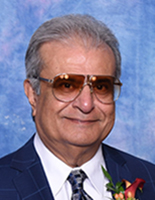 Distinguished Adjunct Professor Asad M. Madni has been awarded the Mahatma Gandhi Pravasi Samman Gold Medal by the Government of India and the NRI Welfare Society. The Mahatma Gandhi Pravasi Gold Medal is awarded to recognize people of Indian origin for their outstanding contributions in their respective fields in the country of their residence and in the service of the wider global community. The official award ceremony will be held in the House of Lords, London, U.K. on September 25, 2017.