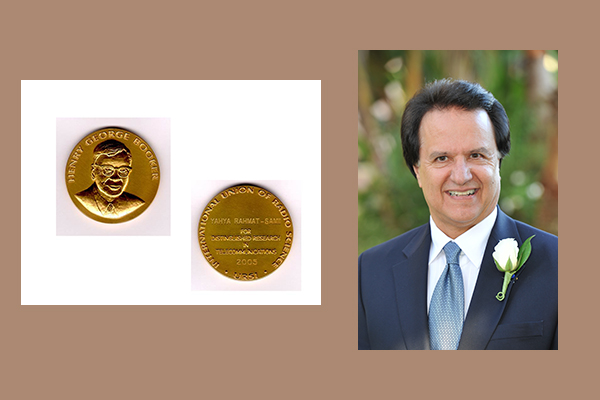 Distinguished Professor Yahya Rahmat-Samii was elected Fellow of URSI (International Union of Radio Science). URSI is headquartered in Brussels, Belgium. This is a newly established Fellow grade for this very prestigious international scientific community. Professor Rahmat-Samii received this designation because of his winning the senior award of this organization, the Henry Booker Gold Medal of URSI, in 2005. He also was the elected president of the United States National Committee (USNC) of URSI and served from 2009 to 2011. In this capacity, Prof. Rahmat-Samii presented the entire US radio scientists at the URSI General Assembly held in different parts of the world. When Prof. Rahmat-Samii received the Booker Gold Medal in 2005 in New Delhi, India, it was in the presence of India’s President, Dr. Abdul kalam. Award citation reads, “For fundamental contributions to reflector antenna design and practice, near-field measurements and diagnostic techniques, handheld antennas and human interactions, genetic algorithms in electromagnetics, and the spectral theory of diffraction.” Prof. Rahmat-Samii is also a Fellow of IEEE, AMTA, ACES and Electromagnetics Academy.